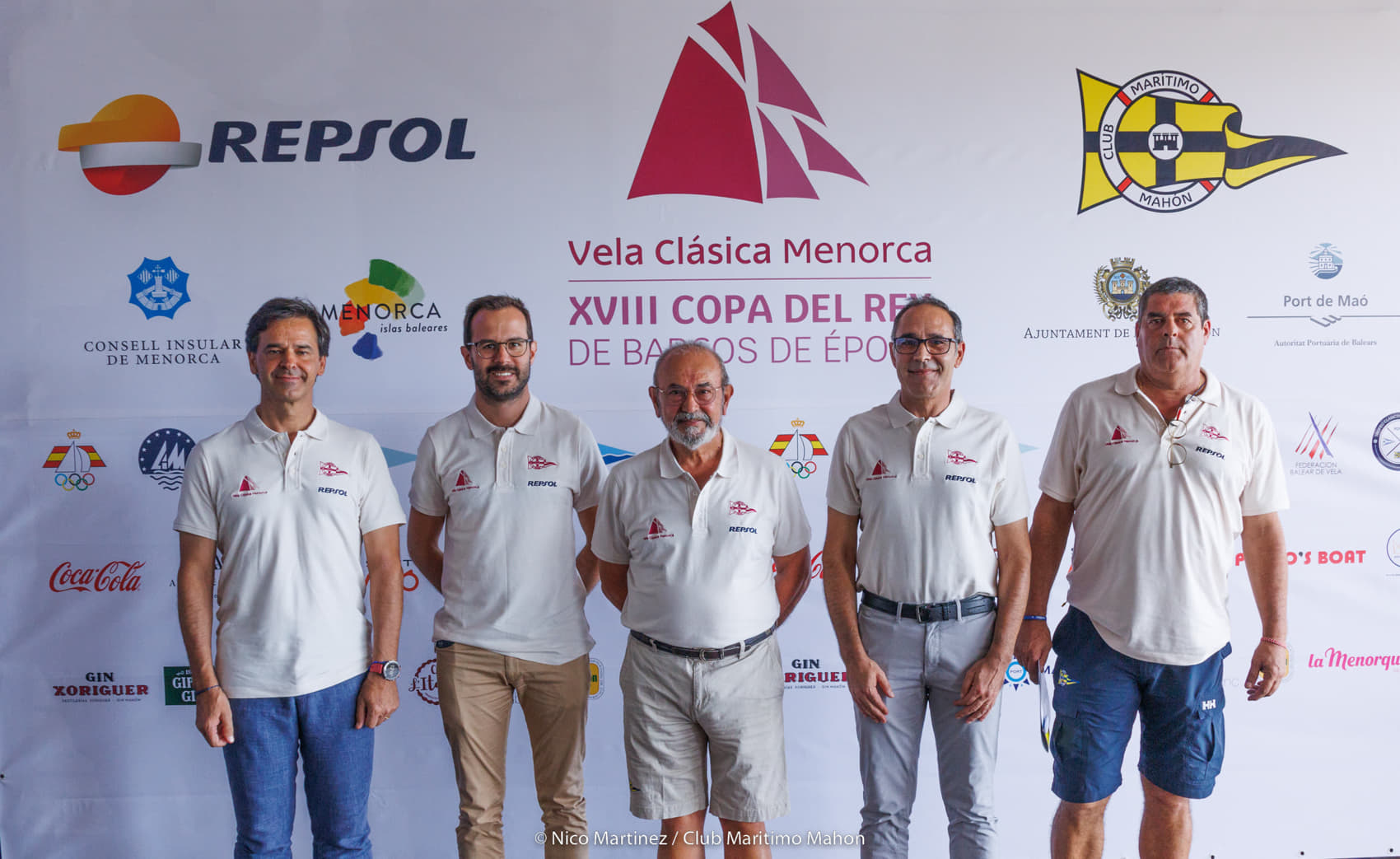 The Club Marítimo de Mahón hosted the media presentation of the XVIII Copa del Rey Repsol de Barcos de Época this afternoon. The competition, considered the most important of its kind in Spain and one of the five most prestigious in the Mediterranean, has managed to bring together one of the best fleets in its history this year. 49 boats from 10 countries have sailed to Menorca to have the opportunity to participate in this great event.

The president of the Club Marítimo Mahón, Antonio Hernández, said at the official presentation that "the club is more than satisfied with the participation and loyalty of the fleet, with a good number of boats visiting us for the first time", and stressed that "the regatta is a special event for Menorca and for Mahón, not only because of the media impact, but also the social and economic impact for both Mahón and the whole island".

Antonio Hernández acknowledged the difficulties encountered this year in organising the event: "After losing the moorings we had, we have managed, after arduous negotiations, to organise this edition, but we don't know what will happen in future editions after the competitions and new concessions".  Hernández wanted to thank the support of Repsol as the main sponsor of the regatta, as well as the institutional support of the Consell de Menorca and the Ajuntament de Maó, and the rest of the collaborators.

The Mayor of Mahón, Héctor Pons, emphasised above all that this regatta places the name of Mahón all over the world: "It has a very important economic impact, socially it has a great repercussion and it is also important to believe in us, because it shows what we are capable of doing with a centenary entity, the gold medal of the city as is the Club Marítimo de Mahón and the support of the institutions". Pons also made reference to the difficulties caused by the change a month and a half ago of the managers of the moorings in the port of Mahón. However, he emphasised "the willingness of the Maó Town Council and the Consell de Menorca to find solutions at a delicate time".

The head of Repsol, Carlos Sánchez Nieto, emphasised the success of the regatta's participation, "not only for the number of boats, but also for the level of the sailors". For his part, the Conseller d'Economia i Territori of the Consell de Menorca, Josep Pastrana, highlighted that the Copa del Rey de Barcos de Época de Mahón has come of age this year with its eighteenth edition. Pastrana valued "the international character of the regatta, which highlights all the naval heritage that we have the opportunity to enjoy these days in the port".

The XVIII Copa del Rey Repsol de Barcos de Epoca is one of the most popular editions in the history of the regatta. The return of the Big Boats (large boats) and the presence of several previously unseen units have attracted a lot of attention on the day prior to the first race, which will be held tomorrow from midday.

Fjord III (Vintage Bermudian), Argos (Classics) and Calima (Spirit of Tradition) are defending last year's title. Viola, the last winner in Vintage Gaff, is not present on this occasion, where the oldest units of the fleet will be measured, all of them pre-1937 and with trapezoidal rig. Patrizio Bertelli's Scud, Paolo Zannoni's Chinook and the Herreshoff Foundation's Spartan are the favourites in this category.

Among the new entries in the XVIII Copa del Rey Repsol, the French 28-metre Sumurun, a design by William Fife in 1914, currently rigged as a Bermudian ketch; the British 25-metre Viveka (Frank Paine, 1930); the Italian Scud, a cutter with a crab rig by Herreshoff launched in 1903, or the Spanish Grayling, owned by shipowner José Rafael Carrió, the work of naval architect J. F. Clyne. F. Clyne which, at 122 years old, is the oldest unit of the fleet assembled in Mahón.

The first race is scheduled for 12:30. The weather forecast announces a northerly wind of 16 knots, with the possibility of gusts of 22 knots, ideal conditions for the giants of the fleet.