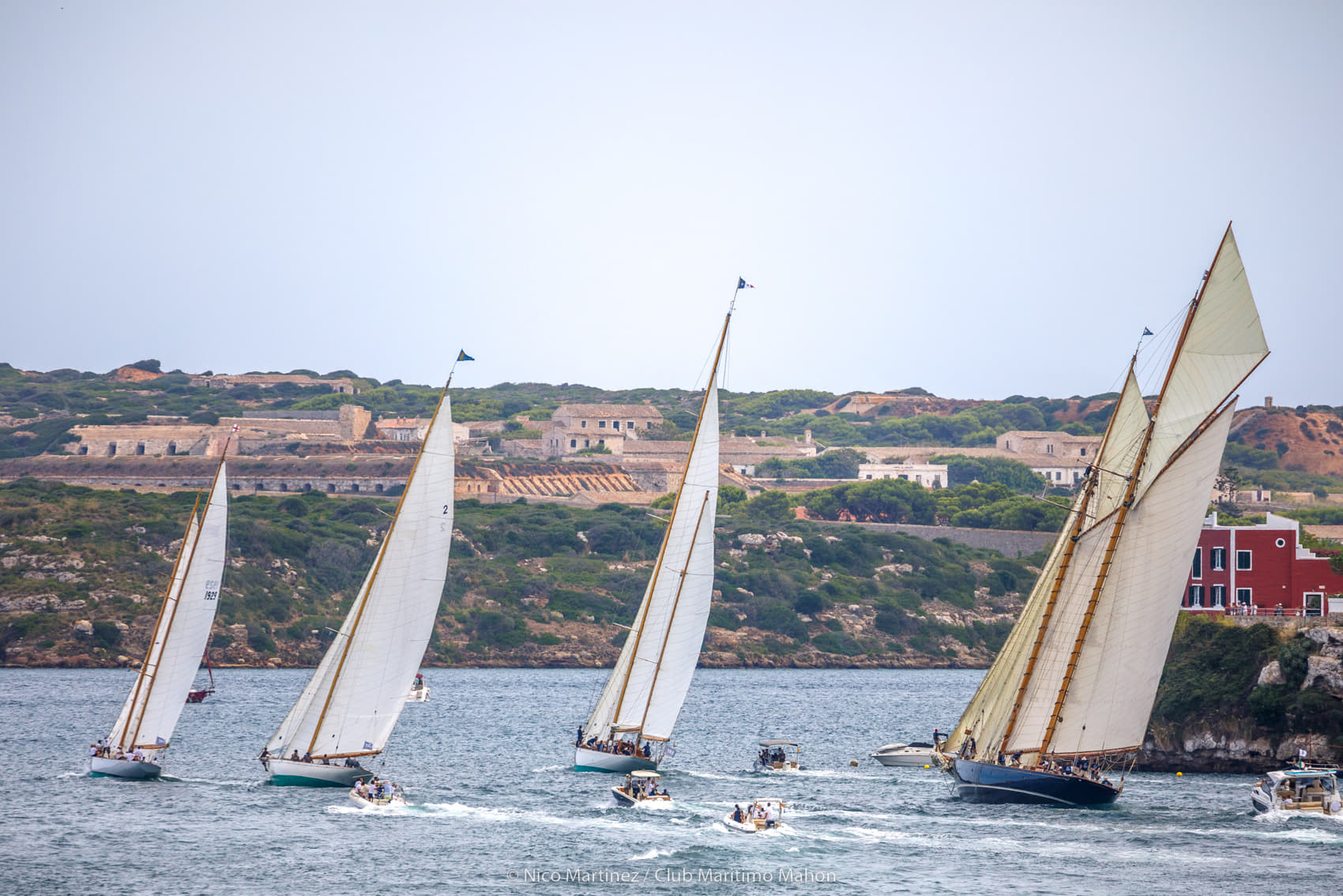 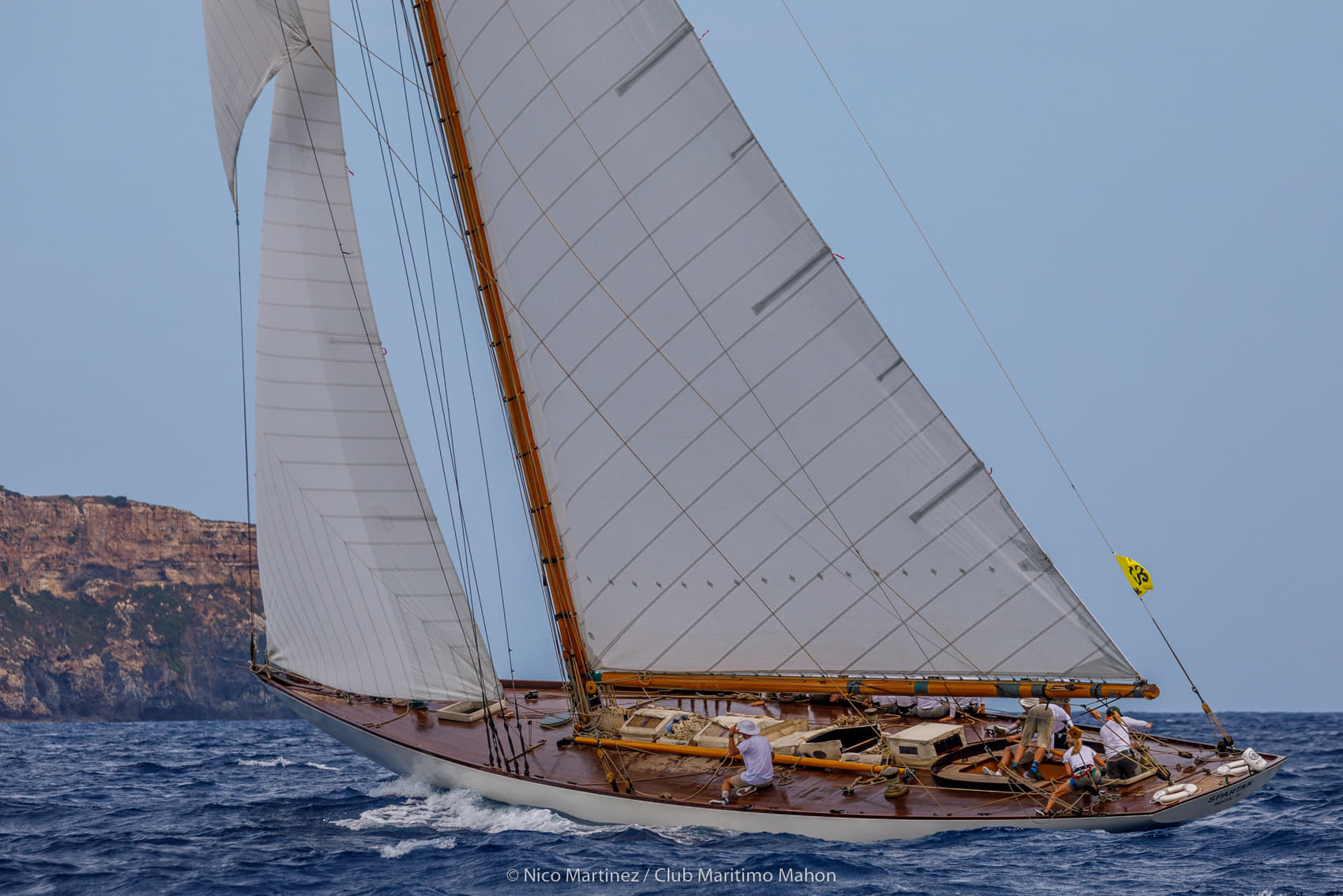 The XVIII Copa del Rey Repsol de Barcos de Época set sail today with magnificent conditions for sailing. The north wind, which began to blow early in the morning, allowed the start and finish of the regatta to be held inside the port of Mahón, offering a unique visual spectacle in the Mediterranean.

The great attractions of this annual meeting of historic boats are twofold: on the one hand, the organisational solvency of the Club Marítimo de Mahón, an institution in Spanish sailing, and on the other, the scenic beauty of the natural harbour of the Menorcan city, one of the largest in the world.

The combination of the wooden sailing boats, half of which are still rigged with the old trapezoidal sails, and the natural surroundings of the Mahon harbour, bring together the best fleet of vintage and classic boats in the Mediterranean every year. This year's edition has reached the figure of 49 boats from 10 countries, one of the highest in history.

The Race Committee began to consider the idea of starting the race in port yesterday afternoon, but did not want to commit itself until it was sure that the conditions were ideal. At 11.00 a.m. the Delta flag was hoisted on the signal mast confirming the start of the regatta at a short distance from land and in full view of anyone who happened to be on the promenade at the time. The fleet, divided into five categories according to the year of launching and the characteristics of each boat, set sail in turns, from 12.30 to 13.40.

The Big Boat, Classic and Spirit of Tradition classes sailed 20.5 miles to a mark located off Cap den Font, in the southeast of Menorca, leaving the Isla del Aire to port on their return to Mahón. The vintage boats rounded this same islet to port and completed a 13-mile crossing. In all cases, the finishing line was located inside the port. The intensity and constancy of the wind, which blew between 15 and 20 knots, gave rise to one of the fastest races in recent years. The Spartan (1913), the first to finish the Epoch class course, took just one hour and 53 minutes.

The French Viveka (1929), 22.5 metres long, was the star of the long awaited return of the Big Boats to the Copa del Rey Repsol de Barcos de Epoca. The Bermudian schooner, designed by Frank Paine and currently rigged by Keith Mills, won the first race against larger rivals, including the Sumurun (1914, William Fife III), which came second, followed by the imposing schooner Mariette (1915, Nathael Greene Herreshoff), of almost 40 metres. The start and finish of these sailing giants were two of the most impressive moments of the race.  The Mariette can spread out over 1,000 square metres of sail area on her two masts. The outrageous mainmast (stern) is one of the largest in the world.

The pre-1950 units compete in two categories: Vintage Gaff (trapezoidal sail) and Vintage Bermudian (triangular sail). In the first of these groups, there were no surprises. Scud (1903), owned by Patrizzio Bertelli and skippered by Brazilian five-time Olympic medallist Torben Grael, won the first leg with a lead of almost five minutes on corrected time over Spartan.

Bertelli had already made it clear in his previous participation in the Copa del Rey de Barcos de Época (2017), then aboard Linet, that his goal is always to win, "whether in classics or in the America's Cup". Grael had announced in the morning that Scud, designed by Nathael Greene Herreshof, is a "very fast and very competitive" boat when the wind picks up. And today was a day of good wind.

The American Spartan, despite its symbolic victory in real time, had to settle for second place. Its 22.15 metres in length meant that it had to give a lot of time to its rivals. Provisional third place went to Paolo Zannoni's Chinook, which maintained a lively battle with Scud throughout the race.

The legend of Argentinian designer German Frers was built on the results obtained more than 70 years ago by owner and skipper W. Scott Perry's Fjord III (1947). That legendary boat once again demonstrated its qualities today, winning the first race of the XVIII Copa del Rey Repsol, and bidding to revalidate the title it won in last year's edition. The Argyll (1948, Sparkman & Stephens), owned by the well-known British actor Griff Rhys Jones, conceded almost three minutes in the corrected time and is in second place, followed by the Comet (1946, Olin Stephens), built by William Woodward-Fisher and skippered by Marc Marciano.

No surprises in the Classics category (boats launched between 1950 and 1976), where Barbara Trilling's Argos (1964) defended her rating in conditions that favoured her larger rivals. The boat designed by Holman & Pye and built in the Spanish shipyard Carabela obtained an advantage of more than seven minutes in corrected time over the Mallorcan Rossina di Mare (1961, Sparkman & Stephens), owned by José Singla, second in the provisional general rankings. The advantage of the Argos, which defends the title obtained last year, was extended by just over a minute over the Giraldilla (1962, Sparkman & Stephens), owned by the Valle de Riva shipowner.

Legolas, a model from the Spirit shipyard launched in 1996, owned by shipowner Jens Ricile, was the surprise winner in his particular battle with Javier Pujol's Calima (1970, Sparkman & Stephens), the boat with the most victories in the history of the Copa del Rey Repsol. Just 50 seconds on corrected time separated first and second place. The Argentinian Matrero (1970, Germán Frers), less than two minutes behind the leader, showed that it can be at the forefront of a class where the differences are minimal.

Tomorrow, Saturday, the competition will resume with the second of the three scheduled races. The forecast is for a northerly wind of between 10 and 17 knots.