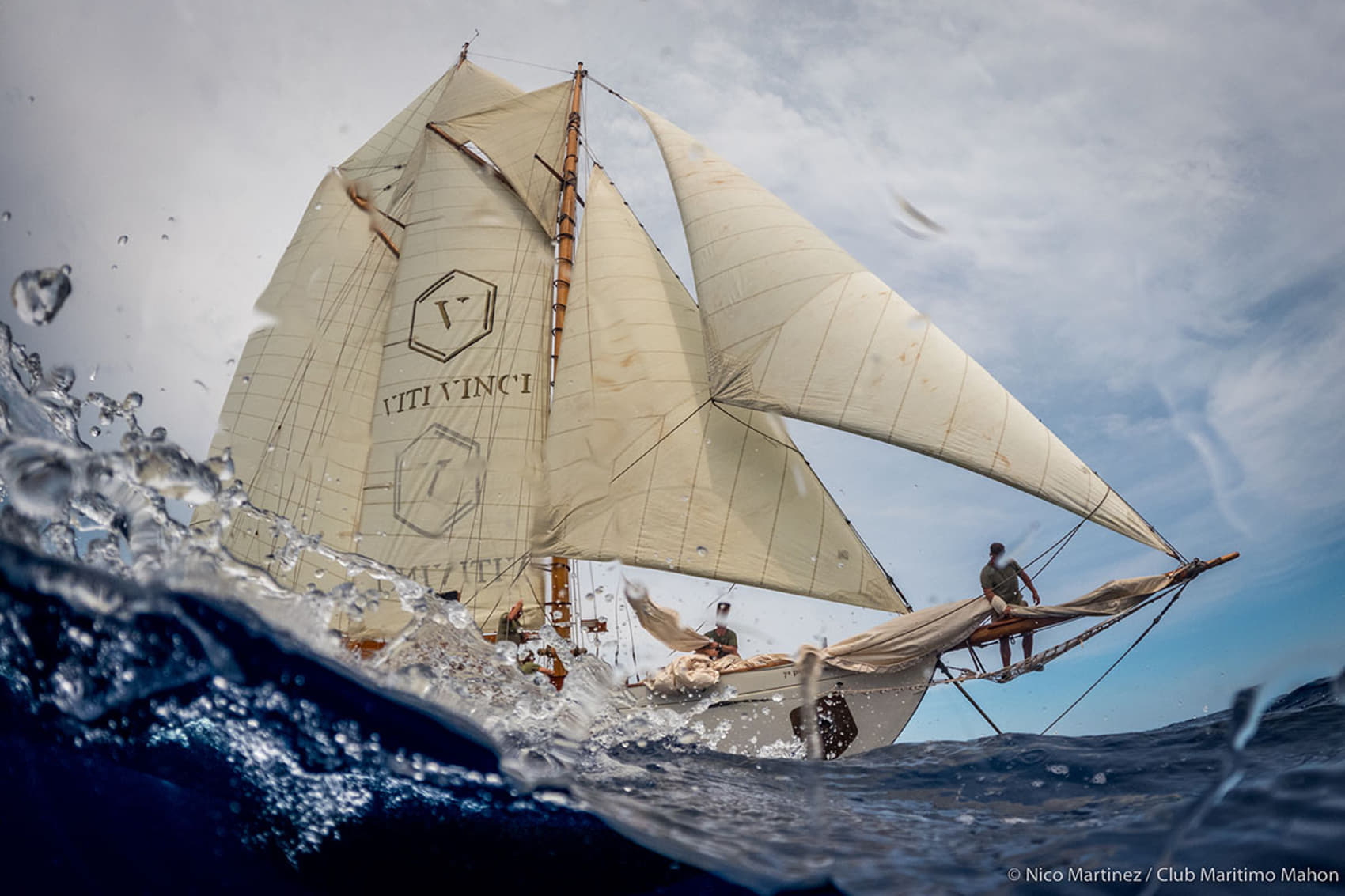 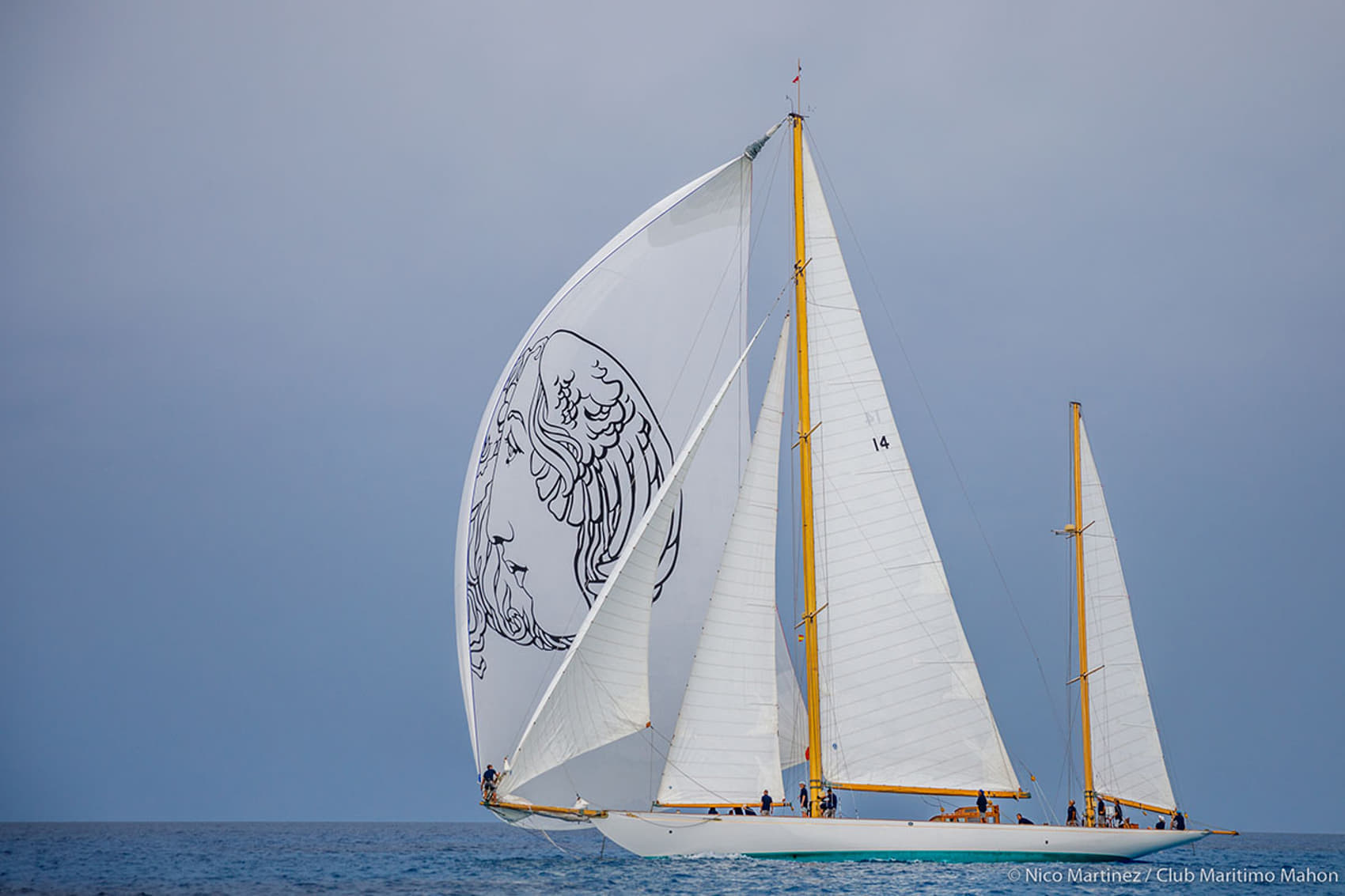 The fall of the wind in the second half of the regatta today marked the penultimate day of the XVIII Copa del Rey de Barcos de Época, organised by the Club Marítimo de Mahón, and deprived the Menorcan fans of witnessing a new arrival in port. The Committee, with good judgement, opted to shorten the races and establish the end of the crossing at the mouth of the Mahón inlet. The Vintage class boats (divided into the Gaff and Bermudian categories according to their rigging) completed a triangle of some 13.5 miles, rounding the Isla del Aire on the port side. The rest of the boats (Big Boats, Classics and Spirit of Tradition) sailed an almost identical course and saw their race reduced from 23 to 14 miles.

The five starts - one for each class - were punctually timed from midday with a light northerly wind of 7 knots. The intensity fluctuated quite a lot over the two courses. The anemometer was highest at the Isla del Aire, where ten knots were recorded. The direction was from 10 to 40 degrees, the result of a very unstable weather situation, with overcast skies and high levels of humidity in the atmosphere.

There are boats that are favoured by strong winds and others by the opposite. This difference was particularly evident in the Vintage Gaff category (the oldest boats in the fleet, with trapezes), where Patrizio Bertelli's Scud (1903), skippered by five-time Olympic medallist Torben Grael, was beaten today by no less than ten minutes on corrected time by skipper Justin Burman's American Spartan (1913), which now leads the general classification thanks to the advantage of its greater length and sail area. Both yachts were designed by Nathael G. Herreshoff, the Wizard of Bristol, and are tied on three points with just one race to go. Scud remains narrowly level with its closest rival, with a mere 19 seconds ahead of owner Paolo Zannoni's Chinook (1916) in third place on six points.

On arrival in port, a very satisfied Burman praised the work of his crew: "Despite the shifty conditions, I think the team did a very good job; it was a very tactical race because of the shifty wind and a challenge for everyone. In these cases it is very important to stay focused in order to sail in the best possible way".

The general classification of the Vintage Bermudian class (sailing yachts launched up to 1950 with triangular rig) suffered the effect of a cocktail shaker. The leader after the first day, Fjord III (1948, German Frers), crossed the finish line in eighth place and dropped back to fourth overall. Comet (1916, Olin Stephens), with two thirds, moved to the front of the fleet, with owner Donna Dyer's Rowdy (1916, N.G. Herreshoff) just one point behind. Jens Kellinghusen's Varuna (1930, Sparkman & Stephens), which no one would have bet on yesterday, climbed from seventh to third and now has a chance of even taking the win.

William Scott Perry had already warned in the morning, shortly before setting sail, that the level of the Bermudian Epoch class is very high, the highest in recent years, and any small concession could be reflected in the classification.

Zaki Karossane, crew member on Comet, said he was "happy" with the boat's performance: "Today has been a very tactical day, with a very shifty wind due to the difference in temperature between the water and the land.  It's been a tough day and it will be tough tomorrow too, because we're expecting strong winds. Our goal is to finish ahead of Rowdy".

In the Big Boats class, where the giants of the fleet meet, Alain Moati's Sumurun (1914, William Fife III) took the lead thanks to today's victory, which puts him on three points. The scenario, with one race to go, is identical to that of the Crab Epoch class: second placed Viveka (1929, Frank Paine), skippered by Gery Atkins, is tied with the leader and either of the two can take the glory. Both boats have made their debut in this year's Copa del Rey Repsol de Barcos de Epoca. Sumurun is an unmistakable William Fife III design, whose rounded sterns and curved lines make the boats from the famous Scottish shipyard recognisable at first glance. The provisional third position goes to another Fife, Hallowe'en (1926), which the naval architect himself said was the most beautiful of his ships. Mariette (1915, Herreshoff), the longest and largest displacement of the 49 boats in Mahon, suffered particularly badly on the light day and finished fourth, a position she also occupies in the overall rankings.

Elodie-Jane Mettraux, director of the Sumurun team, said that the day was very positive for her boat despite the conditions not being the best: "We made some good tactical decisions, for example, choosing to start on the left side of the race course. I'm very happy with the team's work, although we still have a lot to improve on the manoeuvres. I hope that tomorrow there will be more wind and that we will be able to hold on to first place.

The news of the day in the Classics category (boats launched between 1950 and 1976) was the partial victory of Encounter (1976, Germán Frers) ahead of Argos (1964, Holman & Pye), which, nevertheless, retains first place in the overall standings with a comfortable lead of three points. The day's winner, skippered by Bart Weduwer, arrives at the final day in second place, with a one-point lead over Rossina di Mare, the 1961 Sparkman & Stephens, built by José Singla and skippered with great skill by the Mallorcan sailor and navigator Amador Magraner.

Also in the Spirit of Tradition class, the winner of the XVIII Copa del Rey Repsol will have to wait until the last boat to be decided. Calima (1970, Sparkman & Stephens), skippered by Javier Pujol, won the day's race and took the lead, tied on three points with Jens Ricile's Legolas (1996, Spirit). Rafael Pereira's Argentinian Matrero (1970, Germán Frers) completes the podium for the moment thanks to its two third places.

The last day of the XVIII Copa del Rey Repsol de Barcos de Epoca will be held tomorrow. The forecast is for light to medium easterly winds. The prize-giving ceremony is scheduled for eight o'clock in the evening on the terraces of the Club Marítimo de Mahón social building.