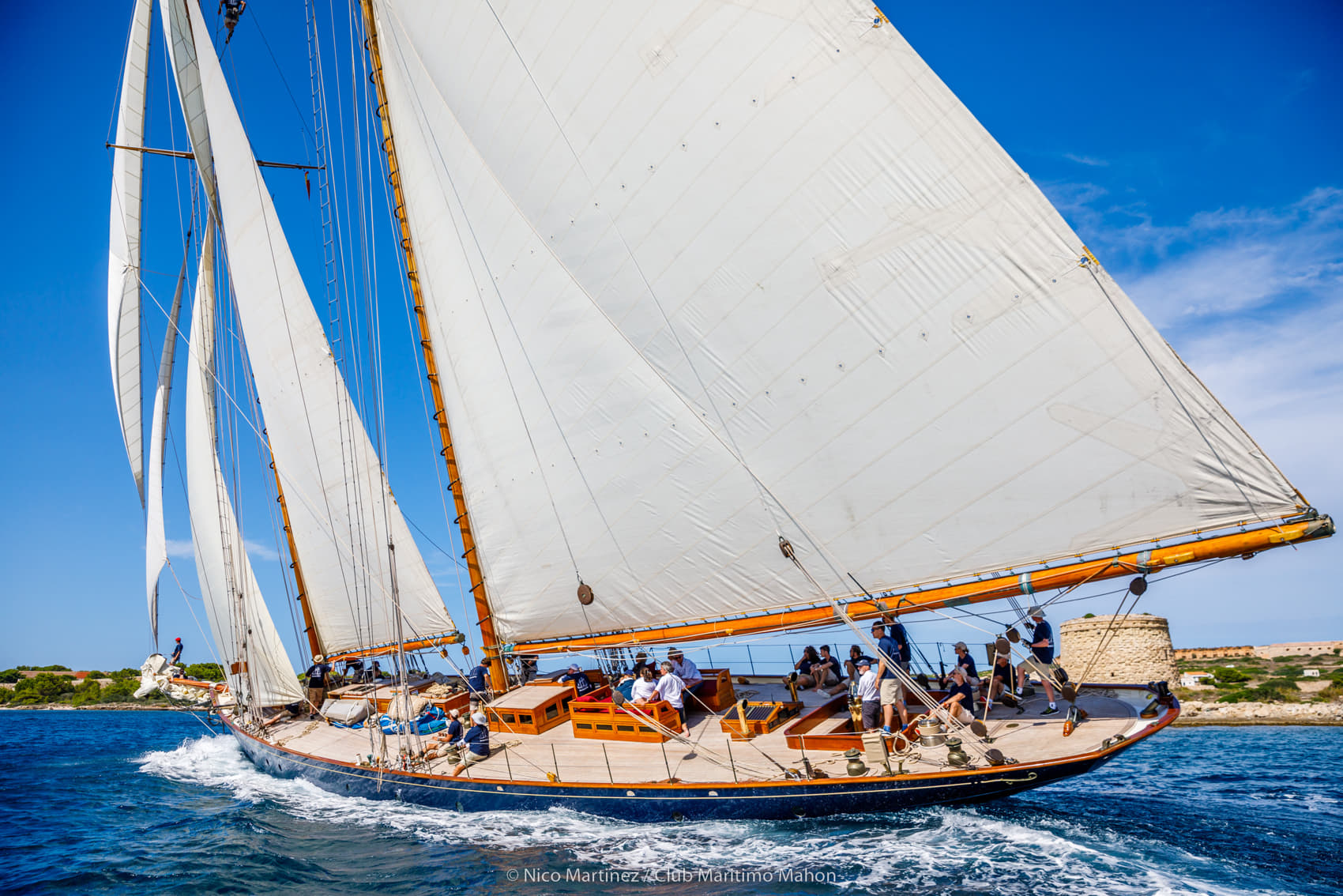 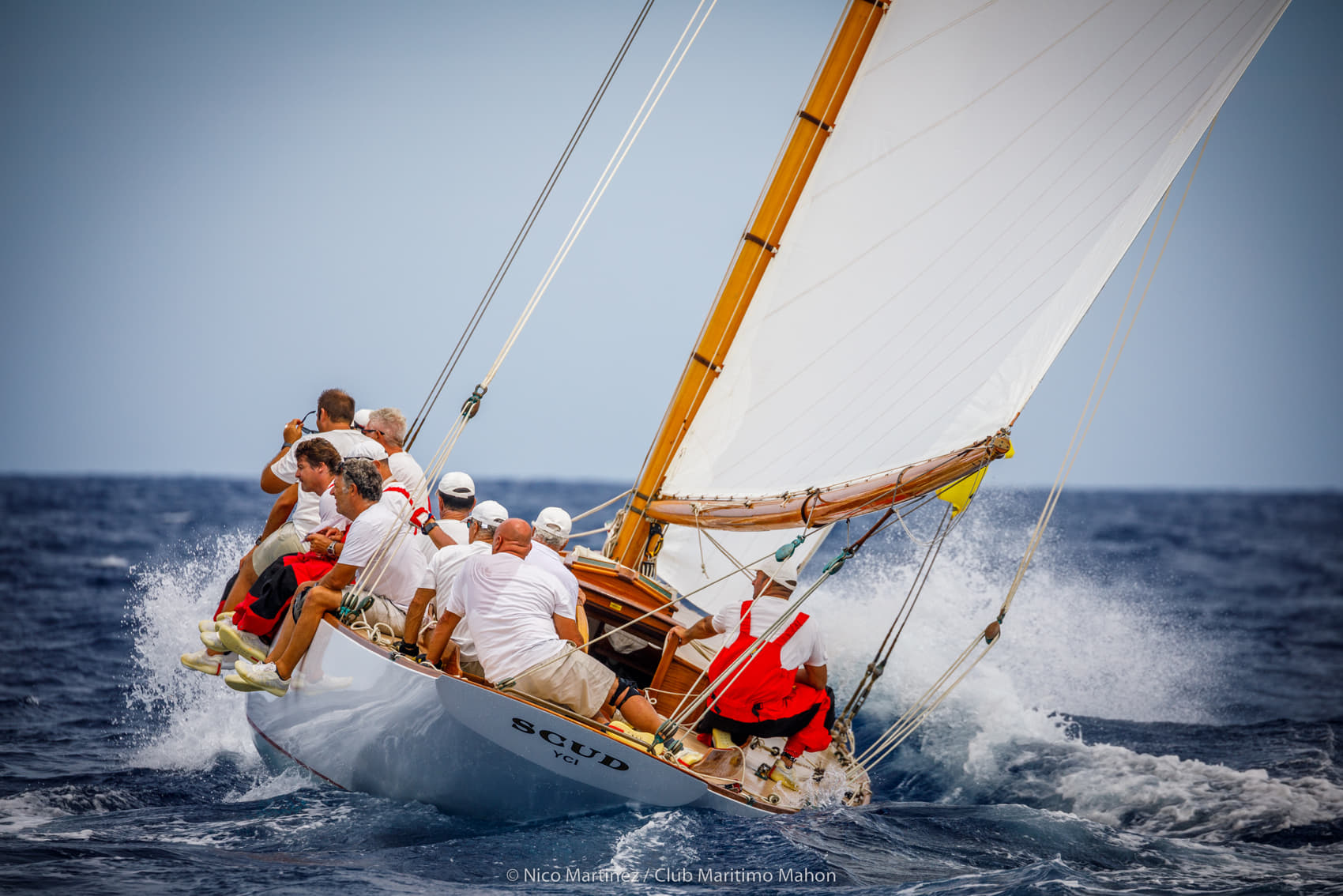 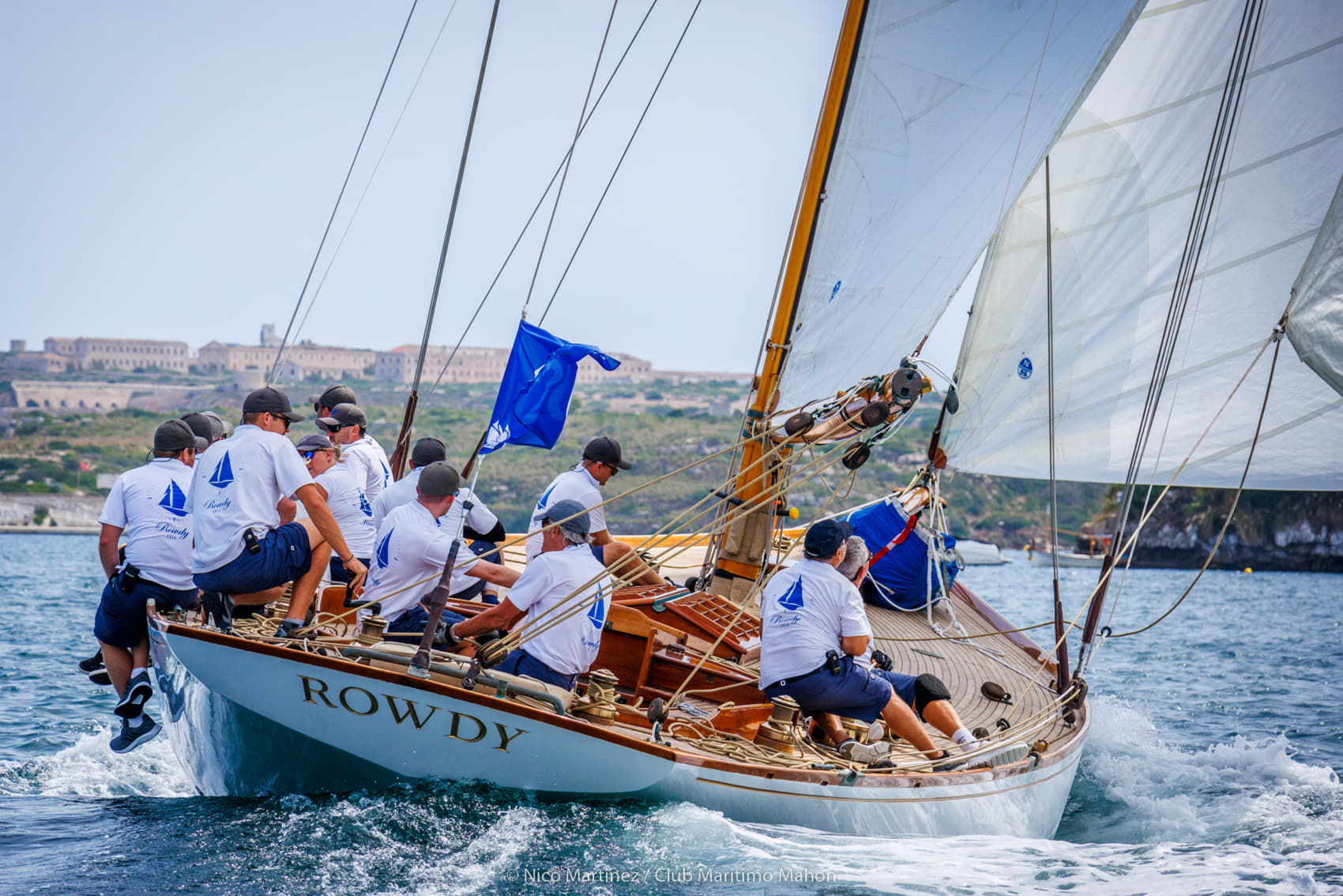 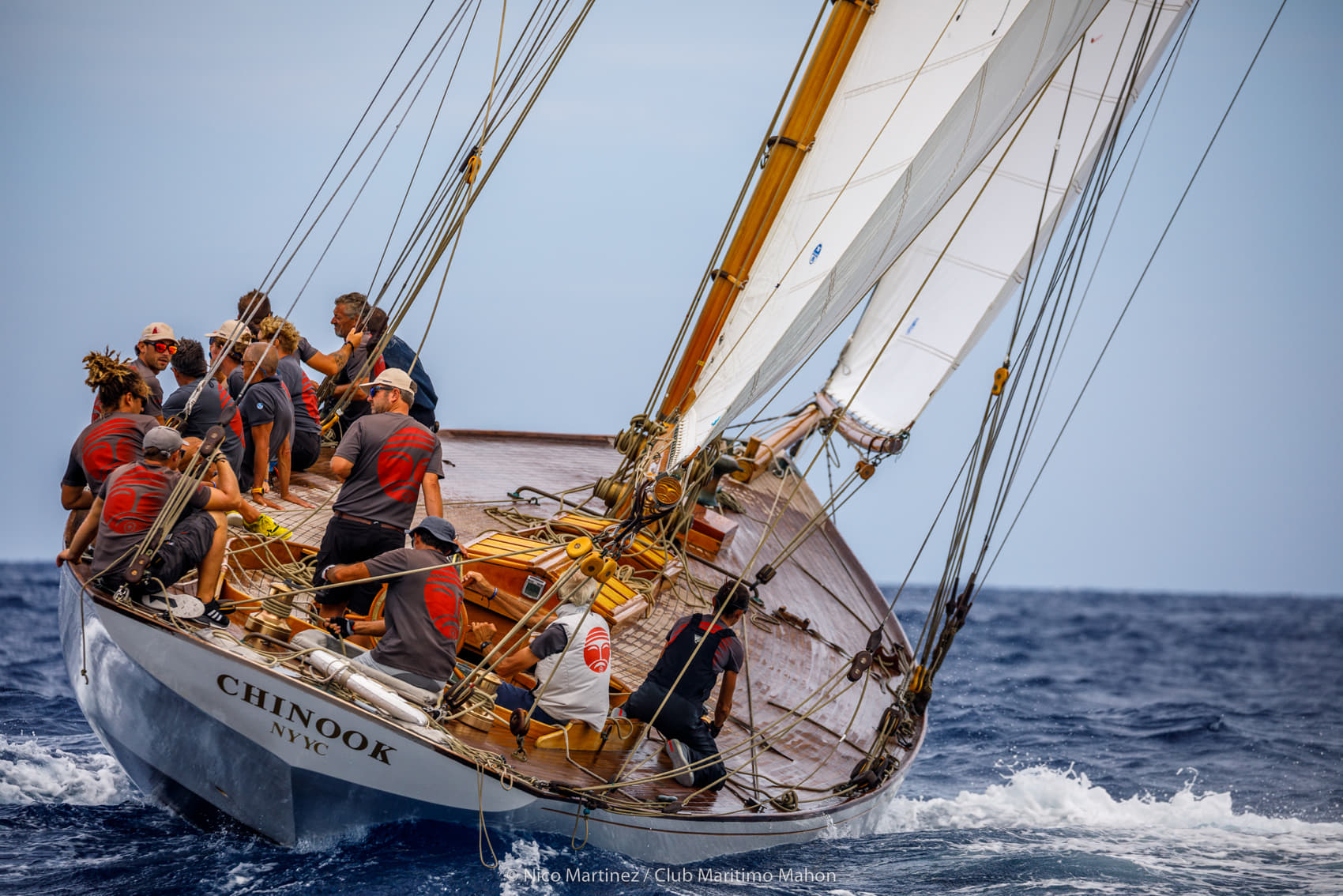 The name of Nathael Green Herreshoff (Bristol, Rhode Island, 1848-1838) is generally associated with the six successful defenses of the America's Cup his designs made between 1893 and 1920. It makes sense: there is no trophy in the sailing world more prestigious than the Hundred Lines Trophy, for which the greatest fortunes in the world continue to fight today. Those victories cemented his legend and earned him the nickname "The Wizard of Bristol".

But the magic of Nathael, named after Nathael Green, George Washington's right-hand man in the American War of Independence, was not limited to drawing invincible boats for the America's Cup; He also invented the "cross-cut" (the arrangement of the sails at 90 degrees to the leech, a technology that is still in full force today) and, of course, built a number of magnificent sailing and racing yachts for businessmen and wealthy men of his time, among them the publisher William Randolph Hearst and the banker John Pierpont Morgan. His office and shipyard, located in his hometown, became a mecca for the great fortunes of the United States and, as a result, an excellent business. Everyone who could afford it wanted to own a Herreshoff.

The 'magician's' talent as a yachtsman, undoubtedly quite remarkable, was overshadowed by his status as a genius in boat design and construction. In 2011, rather belatedly, he was inducted into the National Yachting Hall of Fame. The biographical sketch eludes referring to the sailor and sticks exclusively to the important innovations Herreeshoff introduced in naval design, from the construction of a 31-foot catamaran in 1876 to the five America's Cup defenders (Vigilant, 1893; Defender, 1895; Columbia, 1899 and 1901; Reliance, 1903; and Resolute, 1920), to the Herreshoff 12½ monotype (very popular in its day) or the torpedo boat US Navy Lightning, the fastest of its time.

Herreshoff's legacy lives on through his work. And, somehow, his name retains intact the prestige and attraction that brought him to rub shoulders with the American high society of the last decade of the 19th century and the first three decades of the 20th. Five of his spectacular designs are present in the XVIII Copa del Rey Repsol de Barcos de Epoca organized by the Club Marítimo de Mahón. Some of them already know what it is like to sail in Menorcan waters; others are making their debut in what is unanimously considered the best regatta for classic boats in Spain. All of them are more than 100 years old.

Among those never before seen in Mahón, the Scud (1903), owned by shipowner Patrizio Bertelli (co-owner with his wife of the Prada brand), stands out, which will have in its crew the Brazilian five-time Olympic gold medalist Torben Grael, one of the great sailing legends of all time. The boat has a length of 17.5 meters and competes in the Crab Epoch class, where the oldest boats in the fleet compete. It belongs to the Bar Harbor 31 class, of which 13 units were built, although only two have survived to the present day. At the time they were considered "small" boats; today it is impressive to see them sailing with the whole rag unfurled. Bertelli won the Copa del Rey de Barcos de Época in 2017 aboard Linnet, a Herreshoff NY30, and, if the words he uttered then are anything to go by, he returns with the intention of repeating victory: "The important thing is to win, no matter if it's in a classic or an America's Cup."

The Chinook (1916) also knows what it means to win the Copa del Rey. Designed by Herreshof and built by Oliver G. Jennings at the New York Yacht Club, this imposing cutter retains its crab rig, making it a direct rival of the Scud. Originally named Pauline, before becoming Chinook she was also known as Banshee. With a length of 19.8 meters and a beam of 4.4 meters, she is one of the fastest sailboats in her category thanks to the 230 square meters of sail area she is capable of deploying. Its owner is Paolo Zannoni, CEO of Prada since May 2021.

The Rowdy (1916), owned by shipowner Dona Dyer, is, together with the Chinook, one of the four Herreshoff NY40's still sailing. The initial fleet numbered as many as 14, of which no less than 11 left the yard the same year as the Rowdy. The driving forces behind the class were members of the New York Yacht Club. These sailboats were nicknamed the Fighting Forties and dominated the famous Bermuda Race between 1924 and 1928. The Rowdy's original crab rig has been replaced by a Bermudian (triangular sail), so she will not directly face her sibling.

The Spartan (1913) is, at 22 meters in length, the largest ship of the Crab Epoch class. She was part of a series of nine sailing ships that left the Herreshoff shipyard in Bristol between 1913 and 1915. She had no bowsprit, unusual for her time. Converted to a yawl in 1945 and refitted in the 1960s and 1970s, the Spartan was used as a charter boat in the Caribbean. A first phase of reconstruction began in 1989, but work was interrupted due to various vicissitudes. After some time of abandonment, the Spartan was transferred to the Herreshoff Museum in 1993, where it remained until its last restoration in 2009. The company Nathael Green Herreshoff Restoration is listed as the owner.

Among the five Herreshoffs present in the Copa del Rey Repsol de Barcos de Epoca, Mariette (1915) will undoubtedly be the one that will attract the most attention. Her return to the Menorcan regatta, from which she has been absent since 2014, is also her return to the Big Boats class, where the giants of the fleet compete. This impressive boat, rigged as an aurora schooner, can deploy 1,030 square meters of sail area in its 39 meters in length. It was the first big yacht built by Herreshoff and is one of the flagships of a brand that endures over time thanks to the genius of its creator.