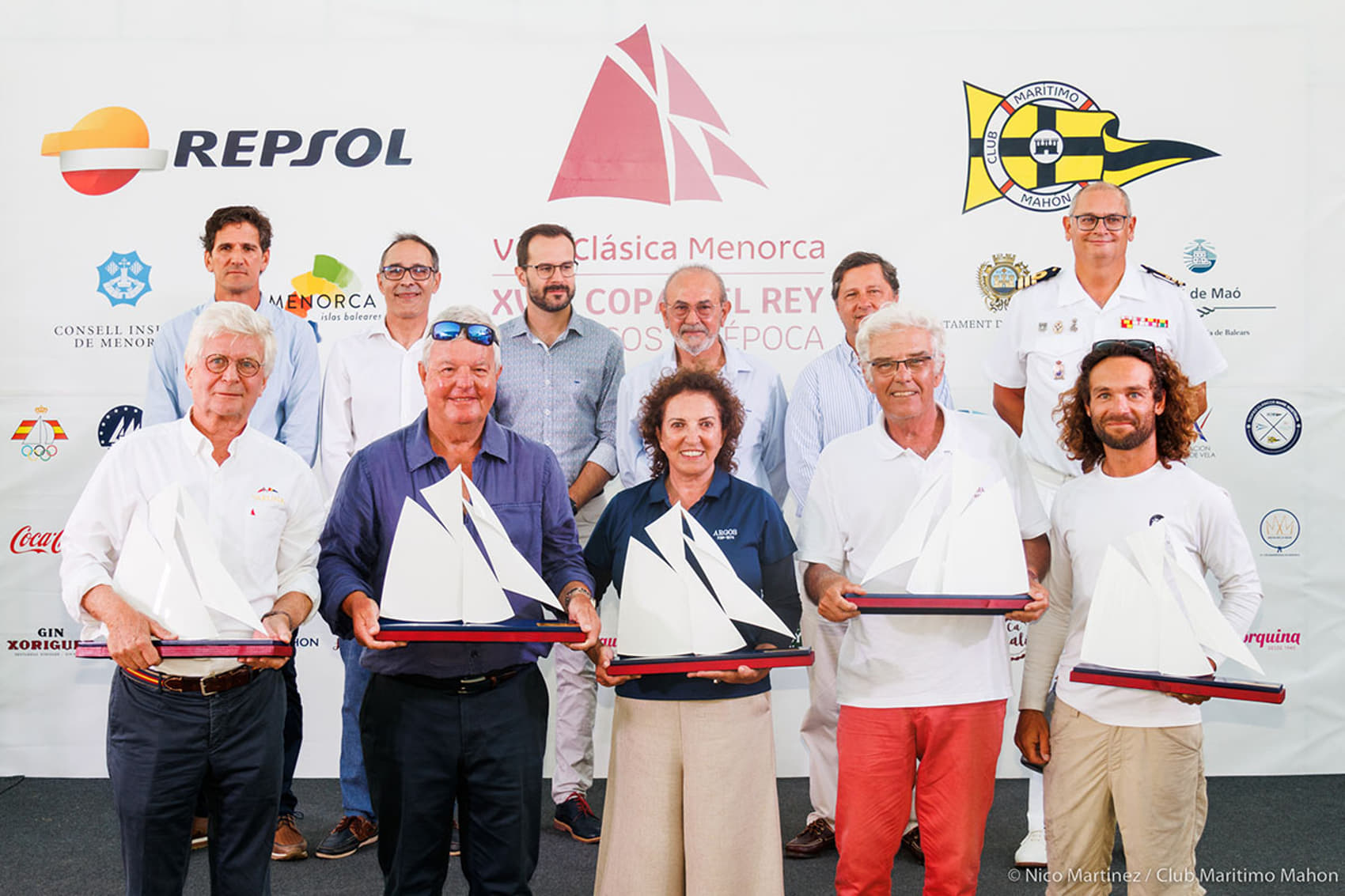 The trophy ceremony has put the brilliant end to the XVIII Copa del Rey Repsol de Barcos de Epoca. The president of the Club Marítimo de Mahón (CMM), Antonio Hernández; the mayor of Mahón, Héctor Pons; and the executive director of Repsol Mobility, José Barreiro; have presented the best crews with their well-earned prizes.

Also taking part in the trophy ceremony, held as usual on the terraces of the Club Marítimo de Mahón, were the Conseller d'Economia i Territori del Consell de Menorca, Josep Pastrana; the naval commander of Mahón, Federico Pérez Dueñas; the delegate of the Port Authority of the Balearic Islands, Vicente Fullana; Valle de la Riva, as representative of the Royal Spanish Sailing Federation; the vice-president of the Balearic Sailing Federation, Pere Nadal and the president of the Royal National Cruising Association, August Vallvé.

The president of the CMM, Antonio Hernández, wanted to make clear in the farewell of the regatta the gratitude to the shipowners "who have trusted in the organizational solvency of the Club Marítimo de Mahón and who, with your presence, that of your boats and your crews, help us every year to cement the prestige of this regatta".

Hernández also acknowledged the work of the participants in this classic sailing regatta: "You are much more than mere sailors; you are also the custodians of the maritime tradition of the world and the custodians of a heritage that, without your passion, would have succumbed to the passage of time". The president of the maritime club also thanked the support of Repsol as the main sponsor of the Copa del Rey de vela clásica and the institutions, as well as the rest of the collaborators who make this regatta possible.

The crews of Viveka (Big Boats), Spartan (Vintage Gaff), Varuna (Vintage Bermudian), Argos (Classics), and Calima (Spirit of Tradition) collected the trophies that accredit them as champions of the most important regatta of historic boats in Spain.

The crew of Argos, led by owner Bárbara Trilling, also received the Juan Sebastián Elcano Trophy from the Spanish Navy, in commemoration of the 5th centenary of the first round the world voyage.

The Copa del Rey Repsol de Barcos de Época de Mahón, as the last race of the circuit, also announced the winners of the XII Trofeo Clásicos Mare Nostrum - Copa de España de Veleros Clásicos. This circuit of five races (Estartit, Barcelona, Puerto Sherry, Palma and Mahón) is organised by the Royal Spanish Sailing Federation, the Spanish Vintage and Classic Boats Association and the Royal National Cruising Association. In the 2022 edition, the overall winner of the circuit was the Giraldilla, skippered by Ricardo Rubio.

From this very moment, the Club Marítimo de Mahón starts the organisation of next year's Copa del Rey Repsol de Barcos de Epoca, which will be held between the 28th of August and the 2nd of September.